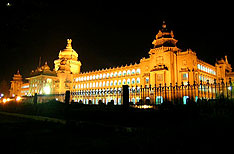 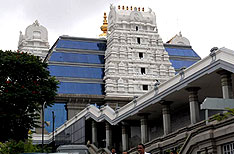 Bangalore, the capital of Karnataka State, is one of India?s most charming cities. Aptly named "Garden City", it boasts of an amazing number of flowering trees and parks. With splendid pink cassias and golden acacias blooming, with jacarandas flowering in purple majesty and the gulmohurs lighting the roads, with their flame-orange brilliance, the city is a sheer delight to simply wander around in.

From a sleeping city, to the Silicon Valley of India, the momentum of India's 5th largest city's industrial and commercial growth remains unequalled in the country.

The British made it their regional administrative headquarters in 1831, and the town, began to take the look of a British cantonment. But it was in 1949, that the city and cantonment areas of Bangalore were amalgamated to form the present city of Bangalore. Around the sixth decade of the 20th century, it became the science and technology center of India, and home to many multinational companies.

Bangalore always had an atmosphere, for serene conduct and tolerance of all people. People from all walks of life are streaming in, because it is a good business proposition. Moreover, the younger generation calls it a happening place. Because of its diversity, Bangalore has been described by every kind of epithet imaginable.

From a sleeping city to Pensioners Paradise, to Silicon Valley, and even the uncomplimentary Garbage City, a variation of Garden City which it once was. But then it has not hindered people from streaming in.

An authentic Udipi menu of idlis, dosas and rice plates. Fiercely proud of their kitchens, all diners are invited to check them out for hygiene. While here do pick up any of their dry packaged mixes. Outlook Traveller recommends the MTR Sambar Mix and the MTR Rawa Idli Mix and fast food and a mix of Mexican, Indian and Italian dishes. If you drop in here, set aside a little time to wander through Nilgiri?s, Bangalore?s supermarket and pick up a few packages of ?prawn papads?.

Bangalore is known for its silk and handicrafts such as sandalwood and rosewood carvings. The Cauvery Arts & Crafts Emporium at 23, M G Road, has a good selection of handicrafts and carpets. The Karnataka Arts and Craft Emporium on M G Road also has a nice variety of arts and crafts. The most pleasant shopping experience is to be found on Commercial Street, home to many silk, handicrafts and clothes shops. The newest lifestyle store, ?Cinnamon?, tastefully put together by Andre Anastassio, is worth a "dekho".

Ganesh Chaturthi is celebrated in September all over the world, the day before Swarna Gowri.

Bakra-e-Id: In honour of the test of faith of Ibrahim by Allah, Muslims around the world sacrifice an animal on the occasion of Id-ul-Zuha to show their faith, allegiance and sincerity towards Allah. In India, the animal commonly used for sacrifice is the goat - which is why the occasion is spoken of in Urdu as Bakhr or Bakra-e-Id.

IA, Sahara and Jet have regular flights connecting Bangalore to all major cities in India and other parts of the world. Airport: Located on Airport Road, it is approximately 8 km from M G Road. Bangalore does not have an international airport yet, but domestic flights operate from the city to all other cities and towns in the country.

Bangalore is well connected to the rest of the country. Chennai Mail and Lalbagh Express come in from Chennai. The Rajdhani Express and Karnataka Express arrive from Delhi. Railway station: Bangalore has two of them ? Bangalore Cantt and City. The City Station is located at the western edge of the city centre. Pre-paid taxis and auto-rickshaws are easily available to transport you to and from the stations.

Karnataka State Road Transport Corporation runs buses within the state, as well as interstate. Computerised advance booking facility is available for all KSRTC buses. Bus terminus: The Central Bus Station is located in front of the City Railway Station.

The Bangalore Palace, in the heart of the city, is a unique edifice, inspired by Windsor castle and built in the Tudor style in 1880, at a cost of Rs. 1 million. A built-up area of around 45,000 sq. ft., this 110-year-old monument, is a popular tourist attraction. Built by the Wodeyar King, it is surrounded by a garden all around, almost giving it a fairytale setting.

The Fort and Tipu Sultans Palace

Only parts of the fort remain, standing in mute testimony to the struggle of Tipu Sultan, against British domination. The fort is noted, for its beautifully carved arches in Islamic style, and for the well-preserved Ganapati temple. Further, Tipu Sultans Palace, close to the fort, is now a museum. Further, an inscription on the wooden screen describes the palace as" the Abode of Happiness".

This 240-acre expanse of greenery forms one of India's most beautiful botanical gardens. The credit for this, goes to the rulers, Hyder Ali and his son Tipu Sultan, who laid out an 18th century paradise, with rare trees, brought from far off Persia, Afghanistan and France. At the heart of the gardens, is situated the Glass House. Its design was obviously inspired by the Crystal Palace, London. Flower shows, are held here every January and August, with an impressive participation. 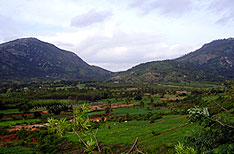 This hill station, 68 km north of Bangalore, was a popular summer retreat, even in Tippu Sultans days. Tippus Drop, a 600m high cliff face, not only provided a good view over the surrounding country, but it was also a convenient place to dispose of enemies. There are two notable Chola temples here. The cottages run by the Department of Horticulture, are the cheapest places to stay, for which you can make a reservation in Bangalore. There are KSRTC buses to Nandi Hills, from Bangalores Central bus terminal.

This dance village, 30 km northwest of Bangalore, was established in the early 1990s, to revive Indian classical dance. Under the auspices of well-known Odissi dancer, Protima Gauri, it offers the long-term study of classical dance and its allied subjects, such as choreography, philosophy, music, mythology and painting. The village, designed by award-winning Goan architect, Gerard Da Cunha, welcomes visitors and accommodates guests.

A must-see for, those who revere Satya Sai Baba, Brindavana an Ashram established by the Baba, is a tranquil place. Special bhajans are organized on Sundays and Thursdays, when Sai Baba is in town. The International Technology Park is right here, so you can view the area, from where part of the IT world is born. 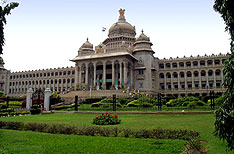 This imposing edifice, built almost entirely of dressed Bangalore granite, is a tribute to temple architecture. Housing the Legislative Chambers of the state government, this 46 meter high seat of the government is Bangalores best-known landmark. There are four domes on all the four corners. The four-headed lion, the symbol of Indian sovereignty, overshadows the main entrance. It houses 22 departments and 300 rooms.

It is a beautiful 1877 structure, with Corinthian columns. Being one of the oldest museums in the country, this museum, boasts an exquisite collection of coins, sculptures, inscriptions, old paintings and excavated items. The Venkatappa Art Gallery, adjacent to the Museum, is named after Late K. Venkatappa, a noted artist. You will find a selection of his famous paintings, Plaster of Paris works and wooden sculptures. Also on view, are works of various contemporary artists?

The awesome monolithic deity, in this temple, Nandi, draws devotees from all over country. One of the oldest temples in Bangalore, situated in Basavanagudi, is dedicated to Nandi, the mount of lord Shiva. This 4.5 meters tall and 6 meters long monolithic bull, is supposed to be older than the temple housing it. It is believed that the source of the river Vishva Bharti, originates at the feet of the statue. 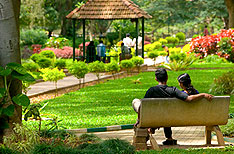 It can be called as an oasis of greenery, in the heart of modern Bangalore. This beautiful park, is the haunt of the seeker of pleasure and tranquility, and is highly popular with walkers, joggers and nature lovers. Complementing the natural beauty of the park, are the red Gothic structures of the State Central Library and the High Court. Situated close to the High Court, is the State Central Library, worth a visit for its rare treasure of books and the building has the Pompeian red color and architectural style of stone and fluted pillars, with walls finished in lime plaster.

Mekedatu in Kannada means Goats Leap. It is so called, because at this point, the mighty Cauvery river, squeezes itself, through a rocky channel, across which a goat could leap. At the confluence of the Cauvery and the Arkavathi, is Sangameshwara Temple. It is a beautiful picnic spot where one can fish or laze around.