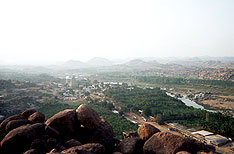 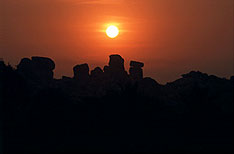 Hampi is famous for its ruins belonging to the erstwhile medieval Hindu kingdom of Vijaynagar and it is declared a World Heritage site. The temples of Hampi, its monolithic sculptures and monuments, attract the traveler because of their excellent workmanship. The Hindu style of architecture found at Hampi reflects the splendor of the Vijaynagar Empire. The rugged landscape adds to the historic ambience of this site.

Hampi is located in the central part of the state of Karnataka, in the southern part of India. It is 353 km from Bangalore, and 13 km from Hospet. It is located on top of a rugged terrain and is 467 m above sea level. Tungabhadra River flows through Hampi. It has a tropical climate with hot summers (April-June), and cool winters (October-February). It experiences the southwestern monsoon rains from June to August.

During 1336-1565, Hampi was one of the gratifying capitals of powerful Vijayanagara Empire, stretched from Deccan Plateau up to the Peninsula. The empire comprised three states - Karnataka, Maharashtra, and Andhra Pradesh. The rulers of this dynasty were great lovers of art and architecture that can easily be traced in the widespread ruins of Hampi.

Rocky hills and the mighty River flowing through the rugged landscape, dominate the terrain of Hampi. Guarded by the turbulent river Tungabhadra in the north and rocky granite cliffs on the other three sides, the magnificent ruins enumerate the glory of grandeur and incredible wealth. The sumptuous residue of palaces and gateways of the broken city narrates a tale of men eternal aptitude and skill of proficiency blended with his measures for unconscious vandalism.

The destruction of Vijayanagar by ravaging Moghul intruders was scandalous and absolute. They reduced the city to ruins girdled by arena of crude slaughter. The government strives to restore this deserted capital. Efforts have been undertaken in the restoration, excavation and preservation of the ruins, which spread over an area of 26 sq. km.

You might be surprised to see the kind of food offered to you at any of the restaurants. You are more likely to find pancakes, pasta or bread-toast than idli and vada in the main Bazaar area. No restaurant in Hampi serves alcohol and non-vegetarian food. Not to be missed in Hampi is the Mango Tree restaurant located inside plantain orchards and facing the river on the lane behind Viroopaksha temple. The ambience is excellent and the food is a good match to the ambience.

Hampi is famous for Purandara Festival. This annual festival is held in January-February in the Vittal temple to celebrate the birth anniversary of the medieval poet-composer, Purandar.

Hampi is located in the central part of the state of Karnataka, in the southern part of India. It is 353 km from Bangalore, and 13 km from Hospet. It is located on top of a rugged terrain and is 467 m above sea level.

Hampi does not have a Railway station. The nearest railhead is at Hospet, which is 13 km from the ruins of Hampi. Travelers use Hospet as a base to commence their journey to Hampi.

The main bus station in Hampi is located in the Hampi Bazaar area. We would provide you all India tourist permit vehicles for the local transportations and also for the intercity drives too. 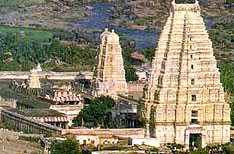 Located amidst famous Hampi Bazaar, the Virupaksha Temple houses a 120 feet elevated minaret at the gateway. Dating back to the 11th or 12th century the temple contains the shrines of Shiva, Pampa and Bhuvaneswari.

Ugra Narasimha is another travel attraction nearby. It is the 6.7m high obelisk chiseled out of a single stone in 1528 at the time of Krishnadeva Raya reign.

House of Victory was the seat of Vijayanagar ruler. It was constructed in honor of Krishnadeva Raya who conquer the King of Orissa in a battle. He use to sit on a grand throne in the House of Victory and witness the nine-day Dasara festival.

Near the House of Victory, two ancient gateways lead to the Hazara Ramaswami temple. The legacy of the royal family, the temple sculptures showcases the scenes from the epic Ramayana, chiseled on the inner temple walls. 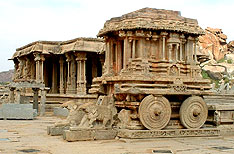 Travel to the most splendid monument of Hampi, it is undoubtedly the Vithala Temple Complex with its 56 musical pillars. The entire temple is in chariot form with stone wheels that actually revolve. Colossal pillars about 15 feet in height, carved out of granite rock uphold the ceiling of the temple. Nearby is the 'Purandra Dasara Mantapa', which has, been also declared a protected monument.

The geographical location of Hampi as well as the weather conditions of the city are just suitable for wild life. The sanctuary was constructed in 1994 in the eastern plains of Karnataka that has proved to be an ideal habitat for the Indian Sloth Bears.

There is an Archaeological Survey of India Museum in Kamalapur that house the sculptures and other artifacts discovered in the region. 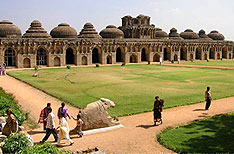 It is a vast complex and ideal specimen of Hindu-Muslim style of architecture. The stable had the capacity to hold 11 elephants at a time in their respective chambers.

It is a massive structure of Lord Ganesh also known as Sasivikalu Ganesha. It is a 9 feet tall statue carved out a single stone, a masterpiece in itself.

The palace was considered as a dwelling place for nobles and aristocrats. It has been a recent discovery. 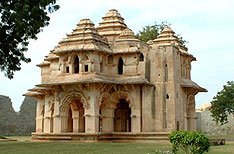 The two-storied palace shaped like a lotus flower at its parapet is an amazing site. It was also a summer palace of the erstwhile rulers.

Other Attractions of the Town

Hampi is a land of that generates awe in its visitors. Another travel attraction of King's Balance- an amazing instrument where kings were weighed against gold, money or grain and then, that amount was distributed among the poors, is just mesmerizing. There is a magnificent Queen's Bath- a grand swimming pool about 50ft.in length and 6ft in depth. Amidst the pool there is exquisite lotus shaped fountain that use to splash out scented water.