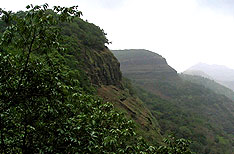 Amid the green Jambol Forest, Matheran is the most splendid hill-station in the Sahyadris. Its pastoral beauty is especially pristine, thanks to a blanket motor transport ban. A quaint little train chugs slowly for miles, taking you through spectacular grassy hillsides, sheer cliffs, plateau and thick forest cover.

The palatial buildings are still the pride of the town, but the breathtaking waterfalls, mist covered valleys, dew dripped greenery and floating clouds here is simply mesmerizing. Dotted with around 33 lookout points, Matheran offers spectacular views of the plains below or across the Western Ghats.

Hugh Poyntz Malet, the collector of Thane district, discovered this lovely spot in 1850. Camping around the village Chowk, he came across this mesmerizing place. Matheran grew more accessible and popular under the patronage of Lord Elphinstone, the Governor of Bombay.

He visited Matheran in 1855 and chose a plot to construct the Elphinstone Lodge. He introduced roadways and, in 1907, opened a mountain railway for the first time. The Britishers also built two churches here.

Matheran is very famous for its groundnut Chikki and Chocolate fudge. Nariman chikki is by far the most popular, with three big shops on M G Road.

A bottle of honey at Rs 75, available at most sweet shops, is a good buy.

Footwear: Every kind of fancy footwear, but not particularly long-lasting. There are over 25 shops you can choose from. Recommended: Dynashwer Kolhapuri Footwear and New Prabhat Footwear at Kapadia market.

Supermarkets: At Kapadia Market. There are some shops on Kotwal road, off MG Road also. Between these two shopping areas, you can get your necessities.

Or the toy train was a brainchild of the Late Adamji Peerbhoy. Built at a cost of Rs 16 lakh, it rolled in for the first time on April 15, 1907. It was drawn by steam engines, which have since been replaced by diesel in 1980.

Lots of it, if you keep your eyes and ears open.

On M G Road is Ram Temple and less than a kilometre away is the Pisarnath Temple, the resident deity of Matheran. The temple is said to date back to the time of shivaji. The Roman Catholic Church is opposite Byramji Jeejibhoy Hospital on MG road and was built in 1858; the St Paul's church is on Kotwal road.

In a picturesque valley is a patch of blue; locals call it Charlotte lake. Bathing is not allowed. Just before the lake is a hill which tops off into a plateau. The view from here is lovely and if you are here just after a spot of rain, mists will roll in.

There are 30 points (all hill stations have points which offer panoramic views) dotting Matheran. On clear days, you can get a hazy glimpse of Mumbai.

Panorama Point: This is by far the best point in Matheran. If you get here you'll know why. You get a magnificent view of the landscape below, to the east, you will see a train winding its way to Pune. To the south lies an unbroken line of hills, and on the western horizon is Mumbai It is said that the Gate way Of India can be spotted from here. Pint-sized Neral appears below. Carry your binoculars.

Named after a Captain Berry, this point which is a plateau is supposed to be the highest point on the hill. Great view of the toy train chugging up the hill (4 km from the Post office.)

Matheran is situated at 803 meters (2,636 ft) above sea level in the Sahyadri range.

The nearest airport is Mumbai, 100kms.

The nearest railhead is Neral and Mumbai to Neral is 90 kms and Pune to Neral is 120 kms. It takes 2 hours to reach Matheran from Neral by Toy train. The Neral-Matheran mountain rail operates throughout the year except monsoons.

It is well connected to Mumbai and the route to Matheran via Neral is 108 kms. State Transport buses ply from Mumbai and Pune to Neral. Taxi services are also available.

The summers are cool and pleasant and the winters are cold. The Sahyadris attract the monsoon clouds and Matheran sees, heavy rainfalls every year.